pendulums, complicité and the construct of ‘performance’

yesterday was a day of thinking. i spent the morning reading brian dillon’s excellent essayism, the afternoon finishing a first draft of my first Area Of Learning, and the evening at andrew woodhead's pendulums, music for bellringers, improvisers & electronics. reading matthew's blog post ⧉ that touches on the freedom of participants in a class to move in new ways as 'the result of not doing so much and giving space' this morning really prodded me to write this up, because i have a lot to say about how pendulums unfolded.

from the publicity, i expected the following:

unfortunately, i did not feel any of those things. in fact the first feeling i had was we've been had.

my first AOL (identifying and critically considering personal Areas Of Learning form the first part of the MA programme) is going by the working title Activating the Audience: Participation and Complicity in Live Performance. as of yesterday afternoon, it sits at a healthy 2000 words, with reference to bourdieu's contextualisation of the aesthetic detachment in 'high' art, my experiential learning on the nature of the performer/audience relationship in both stand-up comedy and performance art, and a healthy scepticism for the distinction between those two things. in my art practice i work across both worlds - so i also talk about tryst ⧉, trust fall ⧉, and it is working as intended ⧉, three works of mine which directly engage with the performer/audience dynamic. 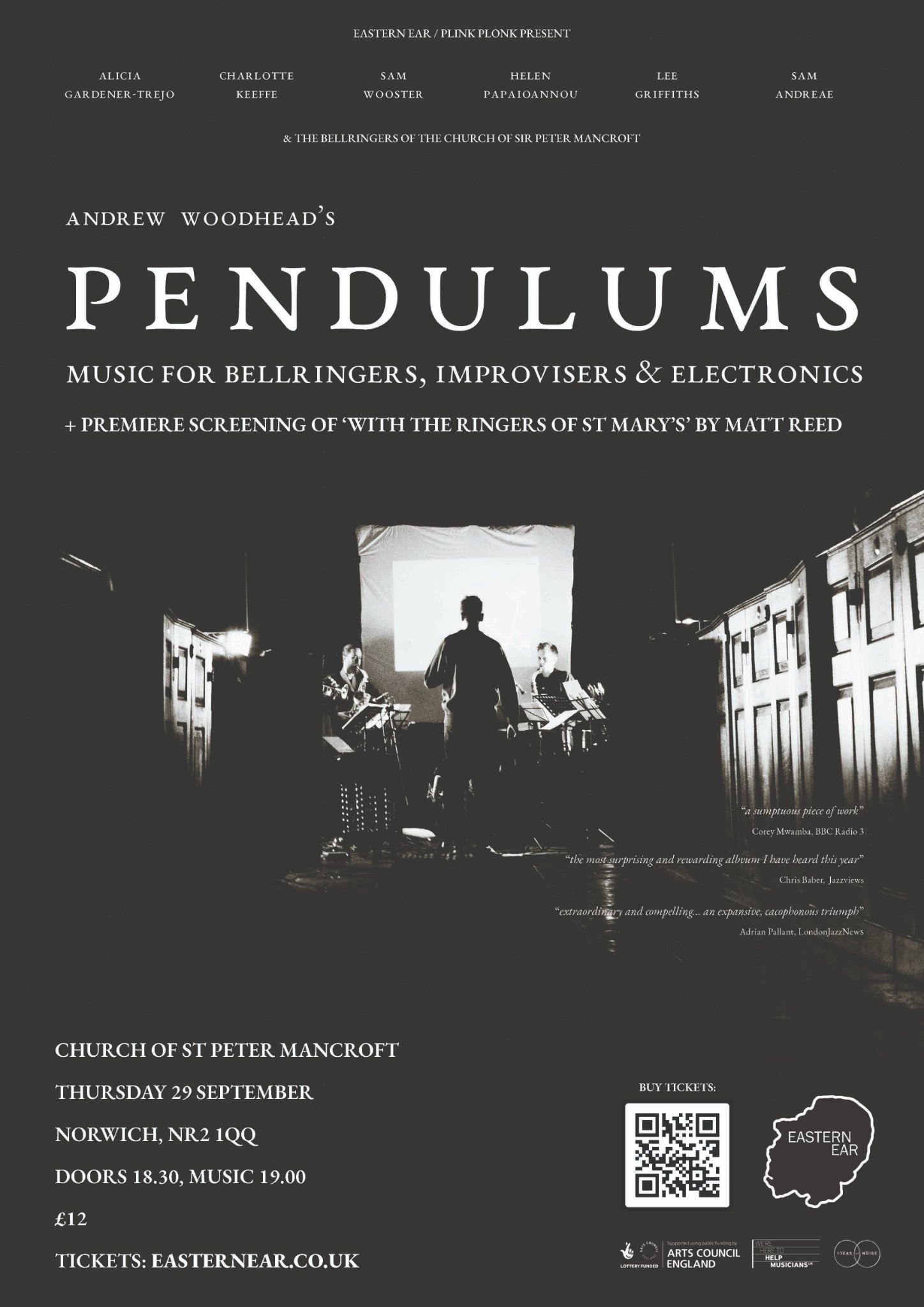 after spending all day considering the complexities of the performance space, including the very construct of performance in and of itself, i felt absolutely primed to see the pendulums i had created in my head, from extrapolating my knowledge of the language used on the publicity. improvisation is a very powerful word (and actually is the topic of one of my other AOLs): ultimately, it's about responsiveness, complicité [1], listening. pendulums felt very constructed - it was literally conducted, kept to time, in order to sync up with some computer generated graphics. this restriction alone felt like the performers didn't have the agency to freely improvise in dialogue with the bells, the space, or invite the audience in.

my excitement about the piece actually also led to detracting from my experience of it. i wanted to sit near the front, in the designated audience space, presumably also the space from which the best feeling could be attained. unfortunately, church bells are designed to be heard from the outside of the church, and the performers were staged at the heart of it. when the bellringing began, it was more coming through the PA in front of us than reverberating through the walls of the church like i'd hoped. it felt distant, and cold.

st peter mancroft is actually quite uniquely suited to a performance like this, because there is a window from the bellringing room(?) which looks over the congregation. this should allow for a greater connection, collaboration, between the performers in the church and the bellringers in the tower - i even commented on this when we realised we could see the bellringers - however due to the overwhelmingly structured nature of the score, and the fact that the construct of the stage had been allowed to take precedence over the experiential nature of what i thought the piece was going to be, this dialogue didn't really happen. i kept wanting the performers to have more agency, to be less conducted and more improvisational. to have complicité between each other.

about halfway through, i was suddenly abandoned by my seatmates - they had gone outside. they had gone to hear the bells. from reconvening after the concert, this was the right move. from the back, from outside, you could feel it. i hadn't felt able to get up because it would have been quite disruptive to others in the space, and the pressure of the church pew being a venue for silent, tolerant compliance is one that apparently cuts quite deep for me, but this revelation - that there had been a great listening experience in there if you just chose to seek it out - frustrated me deeply. that could easily have been everyone's experience! it betrays a prioritisation of the technically impressive spectacle over the communal participatory experience on behalf of those in charge of choosing how an audience interacts with a work. it pushes it firmly over the 'high'/'low' experiential divide, alienating the work from its audience. looking at rather than being within.

in matthew's blog post i was also really drawn to the following:

When we are back we debate three questions: We’re never really unanimous, but I think we also discover that we don’t necessarily know what these words mean, even though we dance every day we haven’t considered what it is. I think maybe this is planting a seed towards autonomy.

i think this is such a useful line of enquiry. i always feel like the magic occurs at the intersection of a yes/no answer to all of those questions. a performance that teeters on the edge of just being something quite normal that happened-to-happen, with an audience that sort of knew they were an audience but also just happened-to-be-there. planned and unplanned, private but public-facing. these contradictions are always so delicious, so productive. i always want this to be up for debate.

i suppose the thing that disappointed me most about pendulums was that it had the bones of something that engaged with all of this. the church bells - so complex, so outward, were treated merely as a texture in an over-considered composition. elements of improvisation were lost, through the feeling of being rehearsed. fussy timing details to line up with computer graphics which only served to obfuscate the real potential of the interaction between church bell and brass ensemble just got in the way. the form got in the way.

we spent some time afterwards discussing the crux of our shared disappointment. we imagined a world where the performers and audience were free to move from the outside to the inside of the church, to be in dialogue with the space. where the performers had agency to not just recite, but respond, to the context, brief, and each other. where the video was simply an unprocessed live feed, to bring the bellringers truly into the room. where the experience of being in the moment (and the experience of the audience at all) was more important than the complex, yet safe, ambition of the rehearsed presentation of the prepared piece.

i feel a bit guilty to be writing something like this. like it does a disservice to the competence of the performers, or the ambition of including bellringing in secular performance - but i must recognise that my real frustration here is with the sheer potential at the heart of the idea that just seemed to get lost. everyone was very competent. everything went to plan, as far as i could tell. the simple fact that there was such a detailed, complex plan, is where the flatness creeps in. it becomes a symbol of technical achievement, a concert in the classical sense, a signifier of sophistication and performer's ego.

to use the language of improvisation, to introduce the expectation of complicité, is where the sense of disappointment turns to one of betrayal. i feel, and felt, mis-sold; it's my hope that through articulation of such we can remember to bear in mind the values, goals, and priorities that true artistic interrogation should, in my view, hold ahead of everything else - that to share a performance is to engage with the stratum between audience and performer. it's about the feeling.

[1] "When engaging in performed Complicité, the performer’s sense of self becomes blurred and distributed through the group." - C. Arculus, C. MacRae, Complicité: Reisting the Tyranny of Talk in Early Childhood. 2020. Global Education Review, 7 (2).

(charlotte (c. arculus) is one of the people i was at the show with yesterday, and introduced me to the concept of complicité, a french term often used in street theatre contexts. it will probably make it into the revised draft of my Activating the Audience AOL... if not, definitely in the one about improvisational collaborative performance! watch this space, etc.)

Here were some thoughts I had. Would you agree that it is often through the projects which are not successful and in fact the disappointments in our careers or experiences that we learn the greatest lessons? I was thinking recently when a few months back I did a really bad performance. Yet somehow I learned more lessons from that than any of the so called successful ones. Or how when in a work setting that doesn't resonate with you, you discover what really ignites you.

The frustration at the time seems unbearable but later you realise the value of those lessons.

to put simply: yes absolutely!! i think it's easier to access the 'extreme' of negative feeling than the extreme of overwhelming success. maybe it's in our nature to dwell on things which we could have improved, could have fixed. this is the root of critique after all - to criticise, but in a productive sense. to point out what didn't work in service of imagining a better version which could exist next.

there's something about success that didn't come wrapped up in a whole bunch of risk that is kind of... nothingy? it worms its way into the routine, and becomes boring. maybe the first time something goes well you'll feel great! but after many successes with no significant change to the parameters, it's just normal. failure, disappointment, regret, do not bear to be repeated, so lead to innovation. success can be comfortable - so if your goal is evolution, learning; success without risk can never be the catalyst of that. i guess risk brings with it a whole bunch of fear, which leads to the dramatic, informative, emotional response!

So so lovely to read your blog, I am happy some things in my post spoke to you. I'm so interested in this idea of "looking at rather than being within."

at the pub after the show, charlotte informed me that the word 'entertainment' comes from an old french word, entretenir, meaning 'to hold among'. i think that's a beautiful etymology - it's easy to dismiss 'entertainment' as being 'low' or tacky - but as bourdieu speaks of the alienation of 'high' art audiences i think it's important both personally and politically to embrace the feeling nature of low entertainment. it's to ask yourself the question; would you rather feel superior in a detached 'refusal of the refusal' or shed that internalised classism and get down in the weeds? i need to read bakhtin - the carnivalesque is evoked here.

It's funny with improvisation because I'm also wishing for a lot when this is advertised... why isn't this material set? does that mean it will fail spectacularly? maybe something beautiful will happen that will be a shared experience only for those in that room at that time?

the risk!!!!! it's the risk!!!!!! and the liveness. if i could get the same experience from my sofa, how is this a live performance at all? i want to be connected with. i want to be entertained!!!

to discuss this (or any other post) email me 📧 - i won't publish without consent.